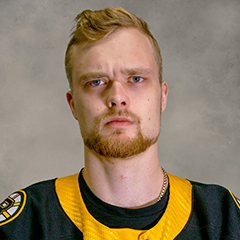 Joona Koppanen was selected by Boston in the fifth round (#135 overall) of the 2015 NHL draft and signed a three-year entry-level contract April 13, 2017. He made his AHL debut March 16 vs Rochester after he was reassigned from Ilves Tampere where he spent the first 45 games of the season. With Ilves Tampere, he scored two goals and 14 points before being assigned to the states. Koppanen played two seasons with the Ilves Under-20 Team of the Junior A SM-liiga, the top Finnish junior league. In 78 games, he scored 32 goals and 48 assists for 80 points with 32 penalty minutes and a +40 rating. Koppanen has represented his home country of Finland in international play on several occasions, skating in 10 games with the Finnish Under-20 Team in 2016-17 notching three goals and three assists for six points with a plus-three rating. He also won gold with Finland at the 2016 World Junior Championships. Koppanen has skated in 5 games this season with Atlanta (ECHL) scoring a goal and adding four assists for five points. He was called up back to Providence on October 28th 2019.