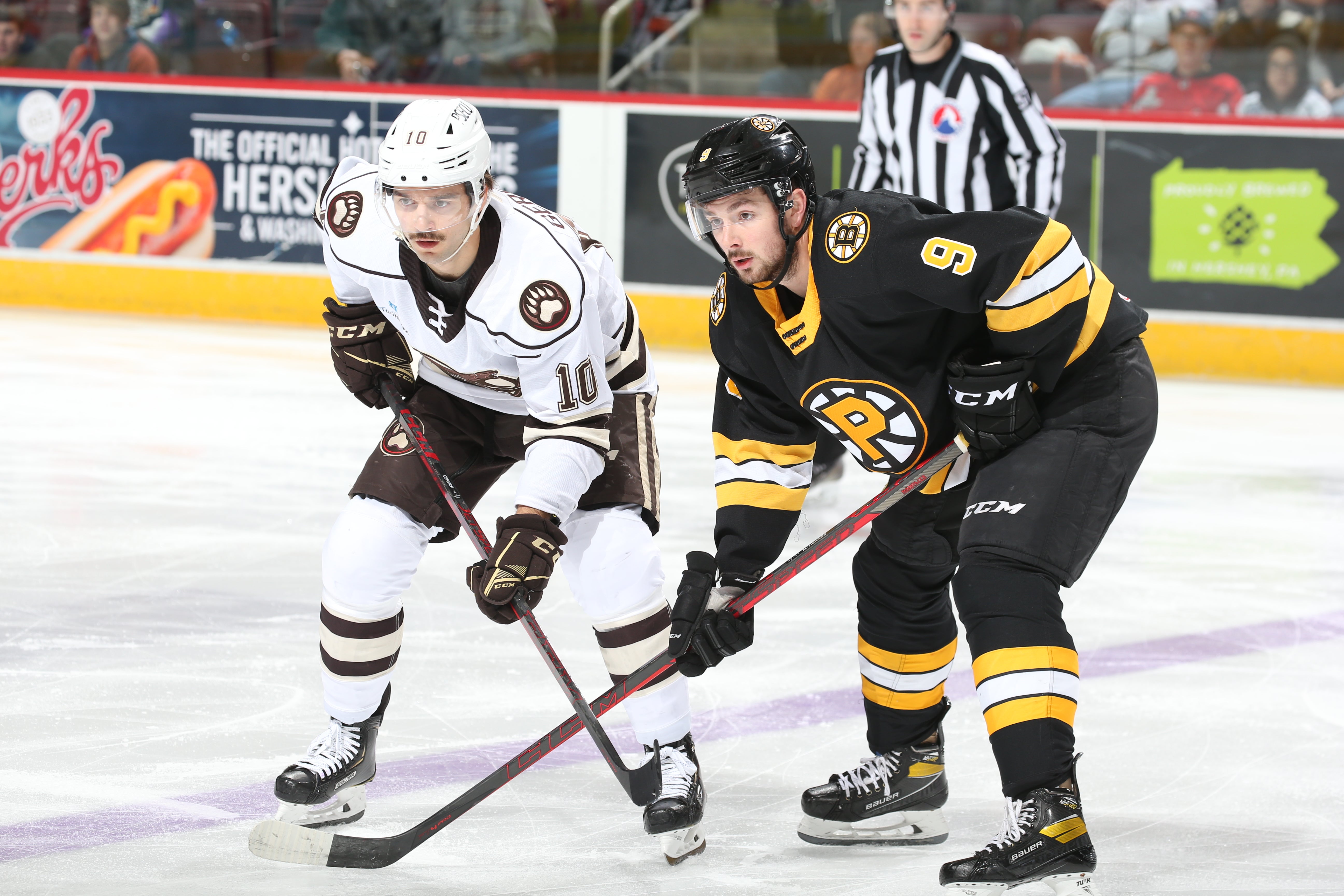 HERSHEY, PA - Jack Ahcan tied the game late in the third period with his second goal of the season, but the Hershey Bears scored in overtime, defeating the Providence Bruins, 4-3, on Wednesday night. Providence scored two power-play goals and went five-for-six on the penalty kill. Troy Grosenick got the start in goal and recorded 28 saves. Jakub Lauko led Providence with five shots on goal.

“It’s a long season. We’re still fairly young in it. We managed to get a point. I guess that’s the positive and we’ll take that.

“I don’t think we’re that far away. We just did that to ourselves tonight. It’s unacceptable and our best players have to be our best players. We’ve got to find a way to win. It was just unacceptable. We managed to get a point, but did we deserve that? I really didn’t think so.

“I thought Grosenick kept us in it when we weren’t good and special teams were obviously the difference.

“Having Troy back from injury is huge. I’m obviously very familiar with Troy. He’s an outstanding goalie.

“I’m just a little but disappointed that we didn’t get it done for him because he is such a good goalie. We’ve got to get him going and playing some more games. He’s better the more he plays. I was really happy with Troy. I think he played great.

“I think the biggest thing with him is his maturity. He’s had two kids since I coached him. He’s a father now and I think that’s been real good for him.”

- Cameron Hughes scored his first goal of the season and added an assist. Hughes has picked up three points (1G, 2A) in his last two contests after recording an assist in Saturday’s game against Wilkes-Barre/Scranton.

- Steven Fogarty scored on the power play, his fifth goal of the season. In two games against Hershey this season, Fogarty has scored three goals and added an assist for four points. He is tied for the team lead in points with 12.

- Jack Ahcan scored a goal and added an assist for his third multi-point game of the season. Ahcan leads all Providence defensemen with 10 points (2G, 8A), which ranks fourth on the team overall. His eight assists are tied for the team lead and he is currently tied for the second-most points amongst all rookie defensemen in the AHL.

- Oskar Steen recorded his sixth assist of the season. He is tied for the team lead with 12 points.

- Jesper Froden recorded his eighth helper of the year, which is tied for the team lead.

- Samuel Asselin picked up his sixth assist of the season.

- The P-Bruins will travel to Bridgeport, Connecticut and take on the Bridgeport Islanders on Friday, November 26 at Webster Bank Arena. Puck drop is set for 7 p.m. ET.