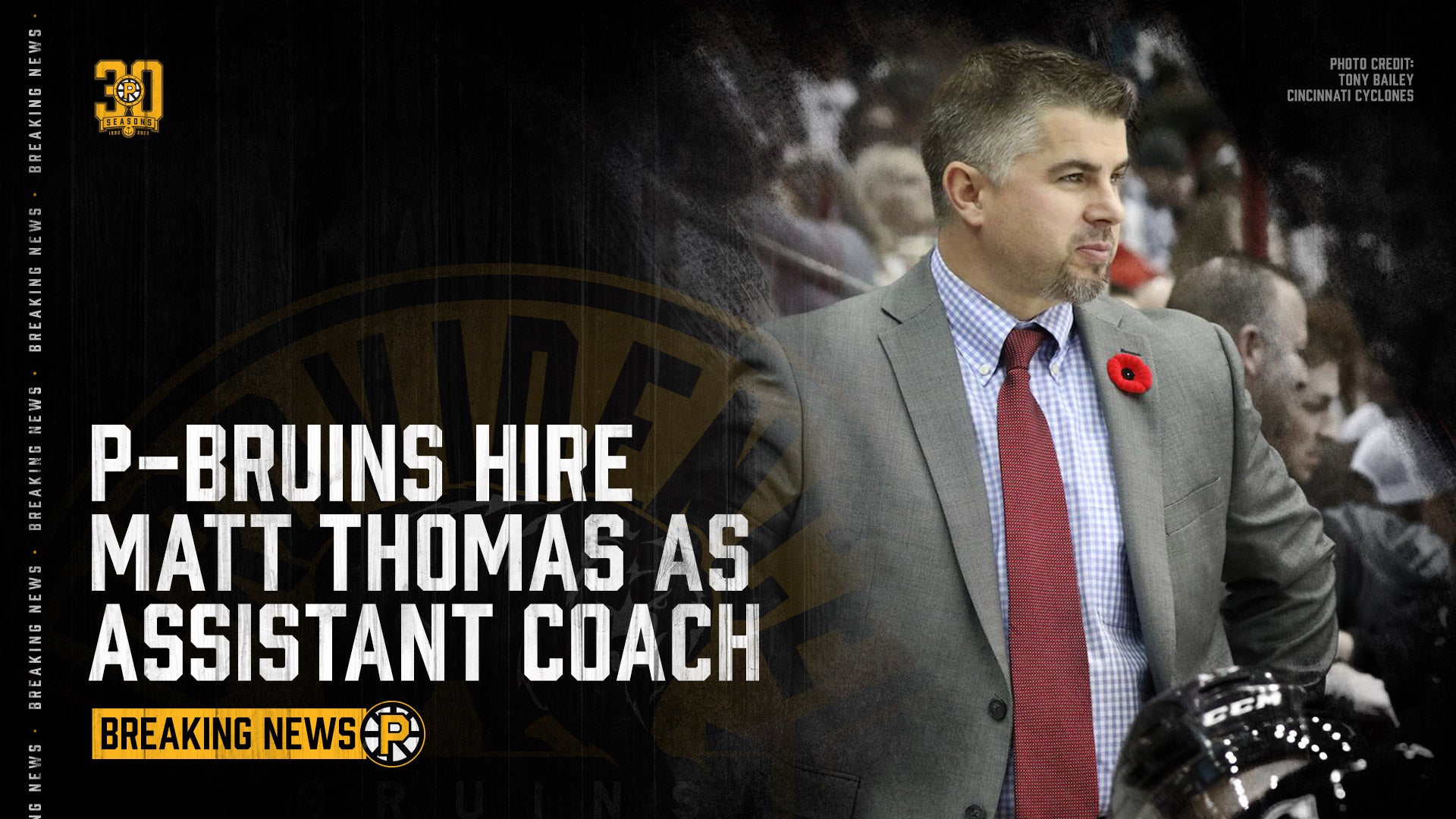 “We are very pleased to add Matt Thomas to our staff,” said Ferguson. “His 17 years of head coaching experience will complement the fine skills and attributes of Ryan Mougenel and Trent Whitfield. We look forward to seeing their growth as a staff as the next iteration in a long tradition of successful coaching staffs with the Providence Bruins.”

Thomas, 45, has served as head coach of the ECHL’s Cincinnati Cyclones since the beginning of the 2018-19 season, leading the club to a 89-30-12-4 (W-L-OTL-SOL) record in 135 games with two consecutive playoff appearances. In his first season with Cincinnati, Thomas led the Cyclones to a league-best 110 points, with the club capturing the Brabham Cup as ECHL regular season champions for just the second time in franchise history. The team recorded a record of 30-2-2-2 on home ice, tying an ECHL record for most home wins and fewest home losses as Thomas took home the John Brophy Award, awarded annually to the league’s Coach of the Year.

“We are all thrilled to have Matt joining our staff in Providence,” said Mougenel. “Matt possesses a unique combination of high energy, innovation, and a proven eye for the game. He understands today’s athlete and his focus on communication, teaching, and forming positive relationships speaks volumes about his values as a coach. Matt is a tremendous fit for our group and understands the Bruins’ philosophy and vision that Trent and I are growing. We are eager to work together and look forward to a seamless transition as we plan our collective approach for the upcoming season.”

A native of Maple Ridge, British Columbia, Thomas has served as a head coach for the past 17 seasons, both in the ECHL and NCAA. His head coaching career began in 2004 with the Atlantic City Boardwalk Bullies. After two seasons in Atlantic City, Thomas was named head coach of the Fresno Falcons, where he spent three and a half seasons as head coach with Mougenel serving as an assistant coach for the duration of Thomas’s tenure. Thomas went on to coach the Stockton Thunder and University of Alaska Anchorage Seawolves before joining the Cyclones organization in 2018.

Thomas’s hire with Providence marks his first coaching position in the AHL. He departs the ECHL holding the record for most career playoff games coached with 108, while his 54 career playoff victories are the second-most in league history.