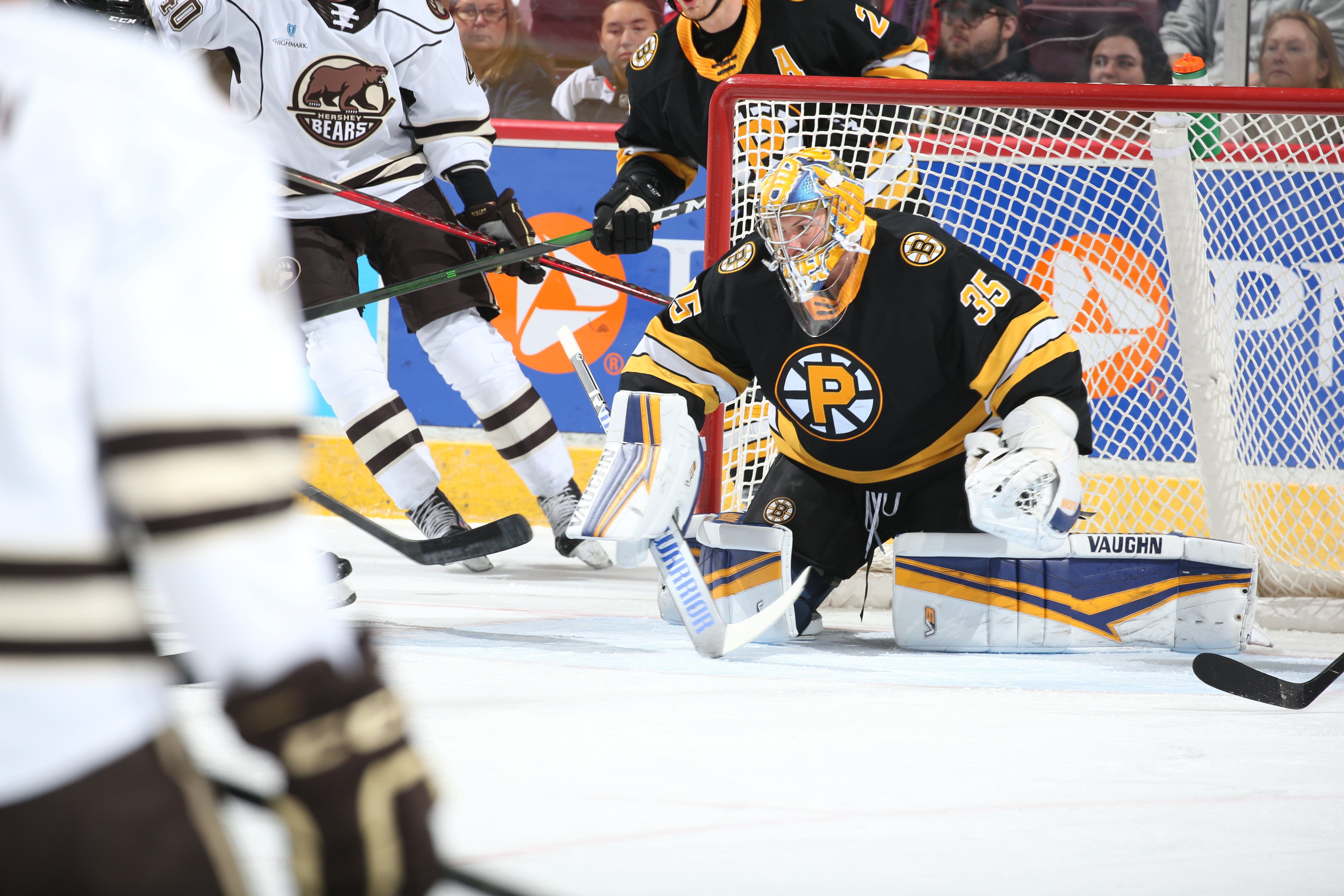 HERSHEY, PA. - Starting in goal for the second consecutive night, Jon Gillies was perfect, making 31 saves on 31 shots, while Steven Fogarty scored two goals for Providence to lead the P-Bruins to a 3-0 victory over the Hershey Bears on Saturday night. After defeating the Wilkes-Barre/Scranton Penguins on Friday night, Providence will head back to Rhode Island with an undefeated 2-0 record on the weekend road trip. The P-Bruins outscored their opponents by a combined score of 9-2 over the past two games.

“I actually am fairly familiar with Jon from being out on the west coast and seeing him play quite a bit. He was absolutely outstanding tonight. He’s the reason we were able to win. I’m happy for him. He’s getting an opportunity here and that’s an important part of it, right? He’s taking a hold of the opportunity. A lot of guys get the opportunity and don’t do anything with it. He’s got a lot to prove and it says a lot about his character. We’re really happy for him.

“The one thing that I’m about and our staff is about - we’re big believers in transparency. We told him everything that was going to happen. He was going to get a chance to start and I couldn’t go beyond that. I think that’s the biggest thing you can do with someone who’s looking for those opportunities, that’s the biggest thing. There’s a lot of guys in that room and they’re all going through different experiences in their journey. I think he’s no different. There’s a lot of great goalies out there and not a lot of jobs. It’s a tough market, so it’s really great to see him having success. We’ll just keep plugging away.”

- Jon Gillies started in goal for the second consecutive night and picked up a 31-save shutout. The Concord, New Hampshire, native started both games for Providence this weekend, making 58 saves on 60 shots and earning two wins.

- Steven Fogarty recorded three points with two goals and an assist. Playing in his home state, the Chambersburg, Pennsylvania, native picked up five points in two games this weekend with three goals and two assists.

- Chris Wagner scored a goal for the third consecutive game. The Walpole, Massachusetts, native has four goals in eight games with Providence this season.

- The P-Bruins will return home to Providence, Rhode Island and take on the Springfield Thunderbirds on Wednesday, November 10 at Dunkin’ Donuts Center. Puck drop is set for 7:05 p.m. ET.