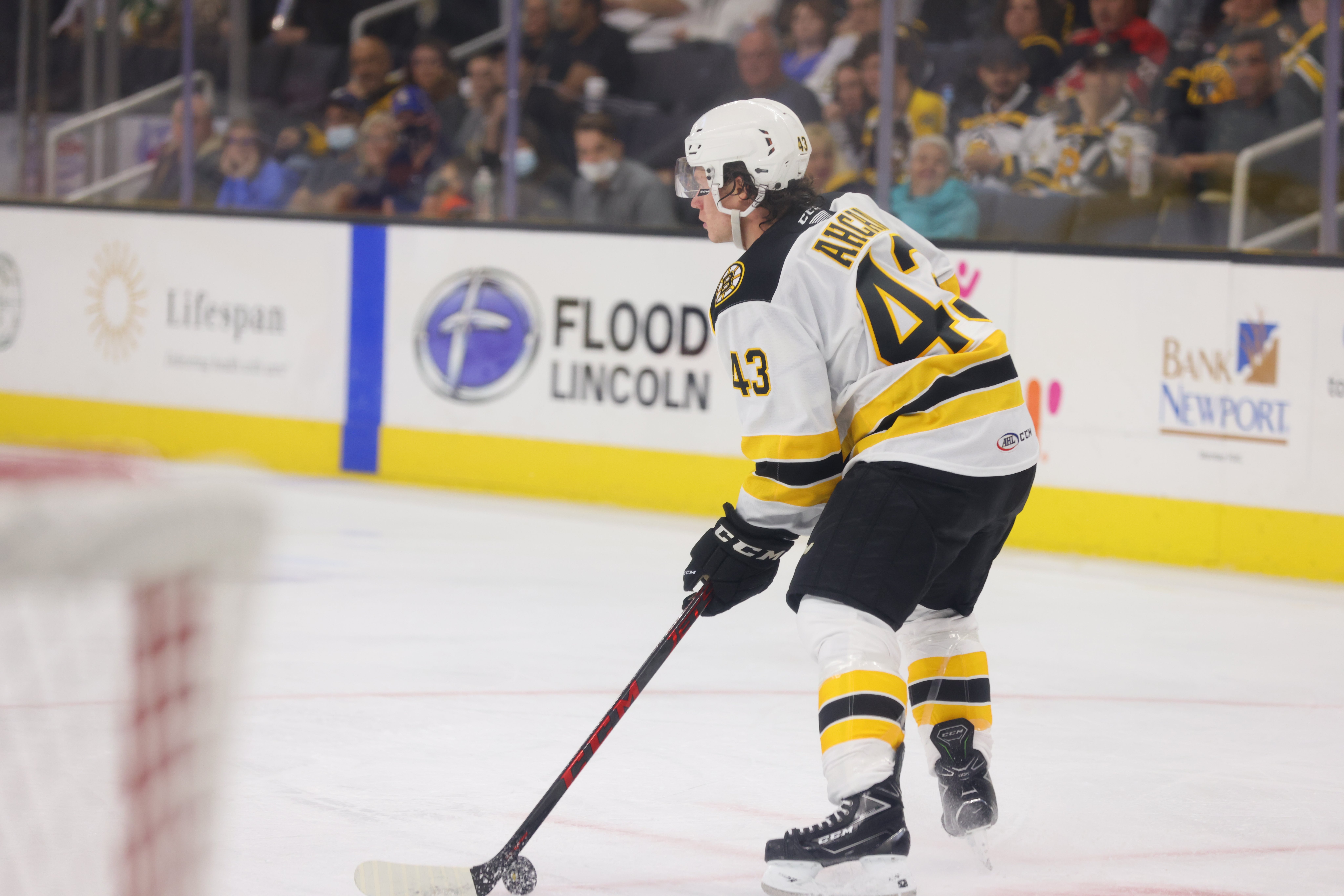 The Providence Bruins earned three out of four points in this past weekend’s two-game slate with a shootout win over the Bridgeport Islanders on Saturday and a shootout loss to the Hartford Wolf Pack on Sunday. With two games in the books, Providence sits in third place in the Atlantic Division behind the Hershey Bears and Springfield Thunderbirds, who are both undefeated through two games.

“I thought we looked really strong,” said Providence Bruins head coach Ryan Mougenel. “Obviously offensively I thought we had some really good looks against Hartford. Early in the season there’s definitely some teaching moments that we’ve got to shore up.

“I think this group accepts coaching really well, which is phenomenal for our staff. We’ve got a lot of different types of players and as a staff we’re figuring out where they belong and where they fit. The message on Friday is just going to be, `Do what you do. Take ownership in what you do and do it well.’

The P-Bruins schedule rolls on with the first three-in-three of the season as Providence travels to Utica to take on the Comets on Friday night. The team will return to Rhode Island following the game and play two consecutive home games at The Dunk with a Saturday matchup against the Laval Rocket and a Sunday tilt against Springfield.

“I think a real important message for us going into three consecutive games is, `Be a part of the process,’” said Mougenel. “The end result isn’t always what you want, but if you’re playing the right way and doing the things that we encourage and want guys to do, the outcome’s going to look after itself.

“We don’t want to get ahead of ourselves or look too far ahead on the schedule. We want to be where our feet are. I think that’s a big message, especially for the American Hockey League. You can get ahead of yourself in this league in a lot of different ways. As a player, sometimes you can get caught up in thinking about what’s going on up top. I think if guys take care of where they are now and where their feet are, we’ll be in good shape.”

The P-Bruins top line over the opening weekend was a trio of Jakub Lauko, Jack Studnicka, and Chris Wagner. The three forwards combined for five points in the two games, with Studnicka also adding a shootout goal in Saturday’s win over Bridgeport. Studnicka (1G, 1A) and Lauko (0G, 2A) are currently tied for the team lead with two points apiece, while Wagner has recorded one point in the form of a power-play, game-tying goal in the third period of Sunday’s contest against Hartford.

Kyle Keyser was scheduled to start Sunday’s matchup against the Wolf Pack, but was called into action early on Saturday after Troy Grosenick suffered a lower body injury early in the team’s opening contest against Bridgeport. Keyser’s night began at the start of the second period and the Coral Springs, Florida, native was perfect, stopping 19 of 19 shots and two of two shots in the shootout. Keyser was called on again to start Sunday’s afternoon game against Hartford, where he made 22 saves on 25 shots and stopped five of six shots in the shootout. Through two games this season, Keyser has recorded a .932 save percentage paired with a 1.64 goals against average.

In total, nine Providence skaters recorded at least one point over the first two games of the season. Samuel Asselin, Tyler Lewington, Jack Studnicka, and Chris Wagner have all scored one goal through two contests, while Jack Ahcan, Matt Filipe, Oskar Steen, Studnicka, and Urho Vaakanainen have all tallied one assist. Jakub Lauko currently leads the P-Bruins in assists with two.

Providence and Utica met in just one contest during the 2020-21 season, with the P-Bruins coming out victorious in a 6-2 win. After falling behind 2-0 in the first period, Providence got a late power-play goal from Brady Lyle with 35 seconds remaining in the opening frame. The P-Bruins never looked back after Lyle’s power-play tally, scoring five consecutive goals to close out the 6-2 win. In total, nine current P-Bruins recorded at least one point that day, including Lyle (1G, 1A), Jakub Lauko (2A), Urho Vaakanainen (2A), Jack Ahcan (1A), Cameron Hughes (1A), Joona Koppanen (1A), Zach Senyshyn (1G), Jack Studnicka (1A), and Alex-Olivier Voyer (1A). Kyle Keyser earned the win for Providence in goal, stopping 25 of 27 shots. However, Providence will face an entirely different Utica lineup than they did last season with the Comets now being the AHL affiliate of the New Jersey Devils.