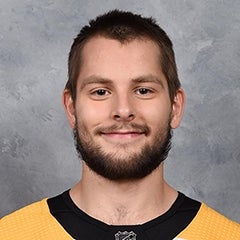 Zboril was the first of three consecutive first round picks by Boston in 2015 when he was selected #13 overall ahead of Jake DeBrusk and Zach Senyshyn. Shortly after he signed a three-year entry-level contract with the Bruins, but has not played for the organization until this year. He has represented his native Czech Republic in international play, winning Silver medals at the 2014 Ivan Hlinka Memorial Tournament and 2014 U-18 World Junior Championship. Zboril also represented the Czech Republic at the 2016-17 World Juniors Tournament, tallying four assists in five games. Prior to turning pro, he spent three years with Saint John of the QMJHL. In 144 games he scored 28 goals and 94 points, adding 6 goals and 20 points in 38 playoff games. Now in his rookie year with the P-Bruins, Zboril made his AHL debut October 7 during Providence’s opening night win vs Springfield. He registered his pro point with an assist December 3 in Bridgeport and scored his first pro goal January 26 vs Hershey.