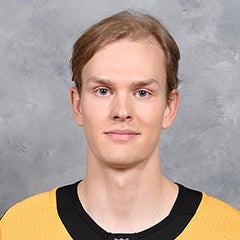 Vaakanainen was drafted 18th overall in the first round by Boston in 2017 and signed a three-year entry-level contract with them June 13, 2018. He played three years in SM-Liiga, the top Finish League, with 2017-18 being his biggest offensive season. With SaiPa, he led his team’s defensemen with a plus-eight rating and scored 11 points in 43 games. Vaakanainen was an alternate captain for Team Finland during the 2019 World Junior Championship and helped his team win the gold medal. In seven games he posted four assists with a rating of +5. This was the third time he represented Finland at World Juniors, as in 2018 he recorded an assist and plus-three rating in five games and in 2017 he played in six contests registering a goal. Vaakanainen started 2018 in Providence, but was promoted to the NHL in mid-October. He suffered a concussion in his second career NHL game and returned to the P-Bruins after the World Junior Tournament concluded. His father, Harri, coached Tuukka Rask in Finland