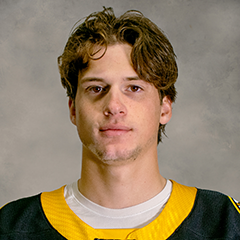 Jack Studnicka was drafted 53rd overall in the second round of the 2017 NHL draft by the Boston Bruins and signed a three-year entry level deal with Boston September 26, 2017. He was assigned to Providence at the conclusion of the Niagara IceDogs (OHL) season on April 17, 2019. It was his second AHL stint, as he joined the team in 2018 after being reassigned from Oshawa at the end of their season. He made his pro debut April 6 vs Hartford and earned his first pro points in the game. Studnicka started 2018-19 with the Oshawa Generals of the OHL, but was traded to the Niagara IceDogs midseason. He combined to score a career-high 36 goals and 83 points in 60 games. Overall in 252 career OHL games, he scored 80 goals and 153 assists for 233 points while posting a +21 rating. He spent over three seasons with Oshawa and was named captain of the team in 2017-18. He led the club in scoring with 72 points in his final full season with them. Studnicka represented Canada at the 2019 World Juniors Tournament, scoring a goal and four points in five games. He also appeared for Canada at the 2017 U-18 World Championship where he netted three goals in three games.