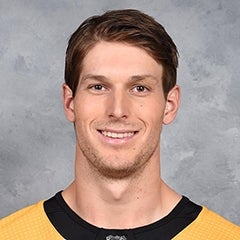 Wiley Sherman was drafted 150th overall in the fifth round of the 2013 NHL Draft by Boston and spent four years at Harvard University. Sherman played in every game for Harvard as a freshman and was part of their ECAC Hockey playoff title that earned them a berth in the NCAA tournament. Playing alongside Bruins prospect Ryan Donato during the 2016-17 season, Sherman helped the Crimson to their first Beanpot championship since 1993. The team also made it to the National Semi-Finals of the Frozen Four. Over four seasons and 137 games, Sherman he scored seven goals and 26 assists for 33 points and +43 rating for Harvard. Prior to his collegiate career, he played 99 high school games for Hotchkiss School, captaining the team his senior season. Sherman signed a two-year entry-level deal with Boston March 21, 2018 and an ATO with Providence that day. He made his AHL debut March 28 against WBS.