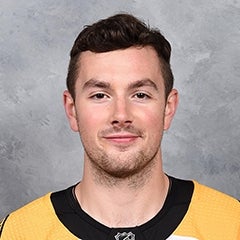 Zach Senyshyn was selected in the first round (#15 overall) of the 2015 NHL draft by Boston and signed a 3-year entry level deal with the club November 12, 2015. He was the third of three straight first round draft picks for Boston in 2015 (Jakub Zboril and Jake DeBrusk). Played four seasons for the Sault Ste. Marie Greyhounds of the OHL. In his first year with the club he was named to the second All-Rookie team. He was an alternate captain his final two seasons there. Tied for sixth in the league in goals during the 2015-16 season, scoring 45 goals in addition to 20 assists and 65 points. His 42 goals in 2016-17 were also tied for sixth in the OHL. In his four years in the OHL totaled 195 games played, scoring 114 goals and 63 assists for 177 points and a +50 rating. Prior to his time in the OHL, he played with the Smiths Falls Bears of the Central Canada Hockey League, skating in 57 games scoring 22 goals (second on the team) and 10 assists for 32 points. This was good enough to place him on the CCHL All-Rookie Team. Added to the P-Bruins roster April 18 when he was reassigned by Boston from Sault Ste. Marie. Never appeared in a regular season game for Providence, but made his pro debut in Game 3 of the Division Semi-Finals against Wilkes-Barre Scranton. He began his first full season in 2017-18 and scored his first pro goal in Providence’s opener against Springfield. He finished third among the team’s rookies in scoring with 26 points.