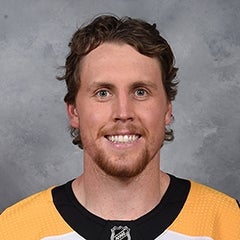 Brett Ritchie began his hockey career playing for the Sarnia Sting and then Niagara IceDogs of the OHL where he played in 217 games tallying 98 goals and adding 90 assists for 188 points. Ritchie represnted Team Canada in the IIHF U18 and World Junior Championship in 2011 and 2013 where Canada fell to Russia both times in the Bronze medal game.

Ritchie was drafted in the second round (44th overall) in the 2011 NHL Entry Draft by the Dallas Stars. He suited up for the Texas Stars for four seasons (2012-2016) where he holds the record for most goals in a game (4) and most points in a game (5) all coming on April 5th, 2013 against the Oaklahoma City Barons.

He tallied his first NHL goal on his first shot in his NHL debut against the Arizona Coyotes on December 31st, 2013.

The 26-year old forward signed a one-year deal with the Boston Bruins in the summer of 2019. Ritchie played in 27 games for the Bruins potting 2 goals and tallying 6 points. He was placed on waivers on January 15th, 2020 and assigned to Providence on January 16th.