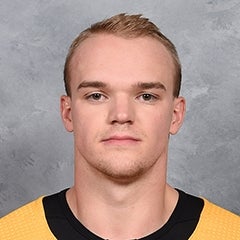 Karson Kuhlman signed a 2-year deal with Boston April 10, 2018 and joined Providence on an ATO at the end of his collegiate career. He made his pro debut April 14, 2018 for Providence against Springfield. He served as captain of Minnesota-Duluth as a senior led his team to a 2-1 victory over Notre Dame in the NCAA Championship. He was named 2018 NCAA Tournament MVP and had a goal and an assist in the Championship game. Kuhlman was an alternate captain for the Bulldogs in 2016-17 and helped his team to the Frozen Four for the first time in six seasons. The team also won 2017 NCHC Tournament and he had a career high 22 points. Kuhlman is tied for seventh in NCAA history with 166 consecutive games played. He also played three seasons with the Dubuque Fighting Saints of the USHL, making the 2013-14 mid-season USHL All-Star (Eastern Conference second team) and winning the Clark Cup in 2013. He led club in goals and finished second in points during the 2013-14 season. Kuhlman won the Gold Medal with US at World Junior A Challenge in 2013-14, scoring a team-high four goals and also skated for the U.S. Under 18-Select Team in the 2012 Ivan Hlinka Memorial Tournament. He took part in the Montreal Canadiens Development Camp in July 2016 and Boston Bruins Development Camp in 2017.