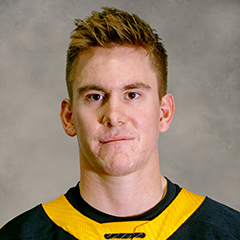 Cameron Hughes was drafted 175th overall in the sixth round of the 2015 NHL draft by the Boston Bruins out of the University of Wisconsin. In 139 collegiate games he scored 23 goals and 69 assists for 92 points with 81 PIM. As a junior he was named an alternate captain of the Badgers, leading the team in assists while finishing third in points. In his senior season he was promoted to captain and played his final two college seasons with fellow Bruins prospect Trent Frederic. After the conclusion of his college career, he signed a 3-year entry level deal with Boston March 10, 2018 and an ATO with the Providence Bruins that same day. He made his AHL debut March 16 vs Rochester and scored his first pro point March 18 vs Bridgeport. Hughes began his first pro season in 2018-19, highlighted by a hat-trick October 28 in which he scored three goals in just 9:04.