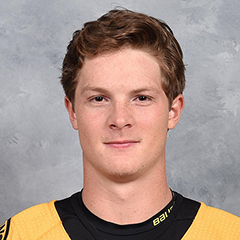 Trent Frederic was drafted 29th overall in the first round of the 2016 NHL Draft by Boston and played his collegiate career at the University of Wisconsin. In 66 career games with the Badgers, he scored 32 goals and 33 assists for 65 points with 58 points. In his first season he was named Big Ten Freshman of the Year, ranking fourth among freshman in points-per-game (1.18). As a sophomore he served as an alternate captain, leading the team with 17 goals and 15 assists for 32 points in 36 games. He played both seasons in Wisconsin alongside fellow Bruins prospect Cam Hughes. Frederic also won the bronze medal with Team USA at the 2018 World Junior Championship, scoring five goals in seven games (good for second on the team). After his sophomore season at Wisconsin, Frederic decided to turn pro signing a 3-year entry level deal with Boston on March 13, 2018 and an ATO with the Providence Bruins that same day. During his first pro shift against Bridgeport, he earned his first pro point.