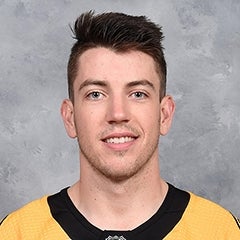 A fourth round pick in 2013 by Boston, Fitzgerald is the son of former NHL player Tom Fitzgerald and cousin of Jimmy and Kevin Hayes. He was MVP of 2012 CCM/USA Hockey All-American Prospects Game, registering three assists. He committed to Boston College in 2012 where he played four years for the Eagles. He led the team in goals during his sophomore season and led in both goals and scoring as a junior. As a senior he was named Assistant Captain of the Eagles in 2016-17 where he had 12 goals and 19 assists for 31 points. Following the conclusion of his senior year at BC, Fitzgerald signed an entry level deal with Boston March 24 and agreed to an ATO with Providence the same day. His first point and multipoint game came March 26 against Hartford. He played a big role for the P-Bruins in the postseason and netted his first pro goal shorthanded in game three of the Conference Finals against Syracuse. Fitzgerald finished his rookie season leading the team’s first year players in scoring and eventually moved up to the team’s top line.