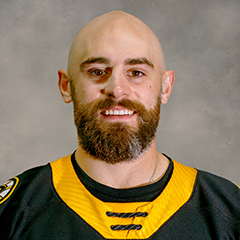 Acquired: Signed by Hamilton Bulldogs to professional try out contract on March 31, 2015

- Received NCHC Academic All-Conference recognition for having a cumulative GPA above 3.0

- Tied for third on the team with 55 blocked shots

- Signed a one-year deal with Providence in July of 2019