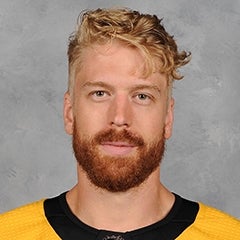 Breen went undrafted after playing five seasons in the OHL with the Saginaw Spirit, Eerie Otters and Peterborough Petes but was brought to the Abbotsford Heat on a tryout basis. He went on to play for the Heat from 2010-2014. Breen made his NHL debut for the Calgary Flames October 22, 2013 against the Phoenix Coyotes and has nine games of NHL experience. He joined the Boston Bruins organization as a free agent in July of 2014 on a one-year two-way contract. His P-Bruin debut came October 10, 2014 against the St. John Ice Caps and he scored his first goal as a Bruin March 15, 2015 against the Norfolk Admirals. Breen has re-signed with the organization on AHL deals each of the last two seasons and is one of the team's alternate captains.